45 km away from Kuhmo, near the Russian border 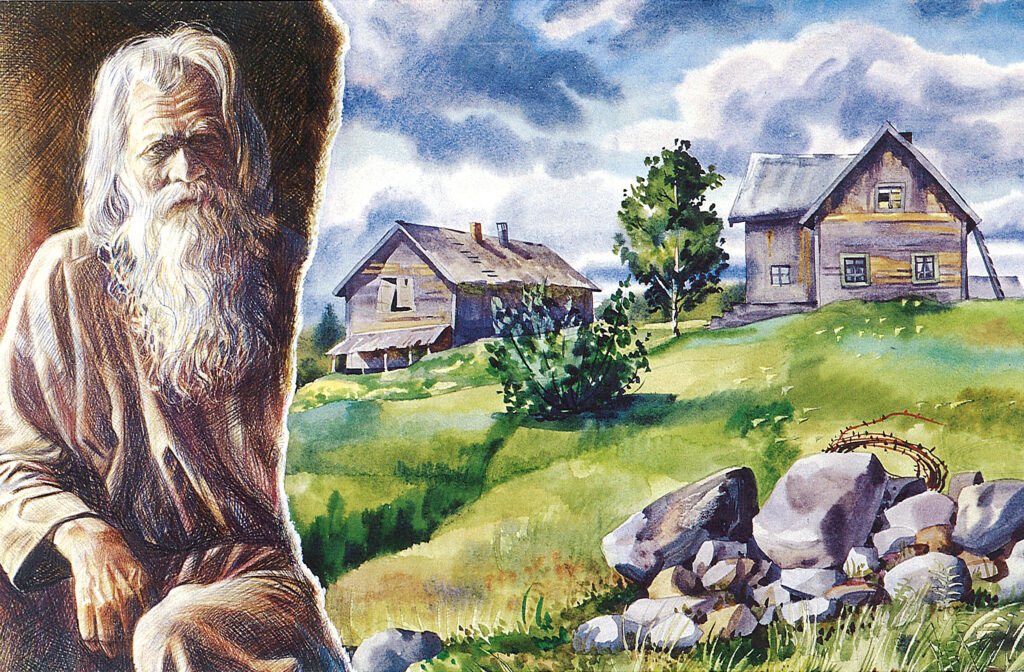 According to tradition, Rimpi was founded in the mid 1800s by Eljas Ahtonen better knows as Uljaska of Rimpi, who later became famous after acting as model for Akseli Gallen-Kallela's Väinämöinen in the Aino Triptych.

As well as Akonlahti, Rimpi played a significant role in the birth of the Karelianism. It became the gateway to the Karelia of the White Sea via Kuhmo for poetry collectors and Karelianists. Many were the ones who visited Rimpi, included Juvelius, Meriläinen, Pääkkönen, Niemi and Ohrt, and, later, Paulaharju, who took his now classic photograph of Uljaksa.

Gallen-Kallela and the Swedish artist Count Sparre made sketches and drawings of the people in Rimpi and published these in their works. On his second trip to Rimpi, Sparre was joined by the sculptor Emil Wikström. Two years later (1894), the architects Yrjö Blomstedt and Victor Sucksdorff began their journey to Karelia in Rimpi.

A short way from Juortane is the first Orthodox house of Rimpi; it is still on the Finnish side of the border, but very close to the frontier. It was here that we saw a house most remarkable for purposes of our study of architecture, for it is a bridge or transitional structure between the Finnish and Russian-Karelian styles. The dwelling proper conforms exactly to the simplest type of the Russian-Karelian model, but the corners are assembled particularly well (check the floor plan below). In the main room, pertti [or pirtti], there is now a fireplace oven with the chimney but before there was a stove-oven without external outlet. There are 3 windows on the main side, 2 on the sidewall and 1 near the oven. I didn't notice is there a karsina [basement], but I remember the windows to be pretty low. The barn was on the right sido of the sintsi [entrance], next to the pirtti. The tanhuat [upper floor of a sheltered stable] were in front of the pirtti's door, really close to it. The leävä [outdoor stable] was on the left side. There weren't other buildings. That was the simplest type, primitive type, of the karelian house, before the parts were fused tpgether in one building! 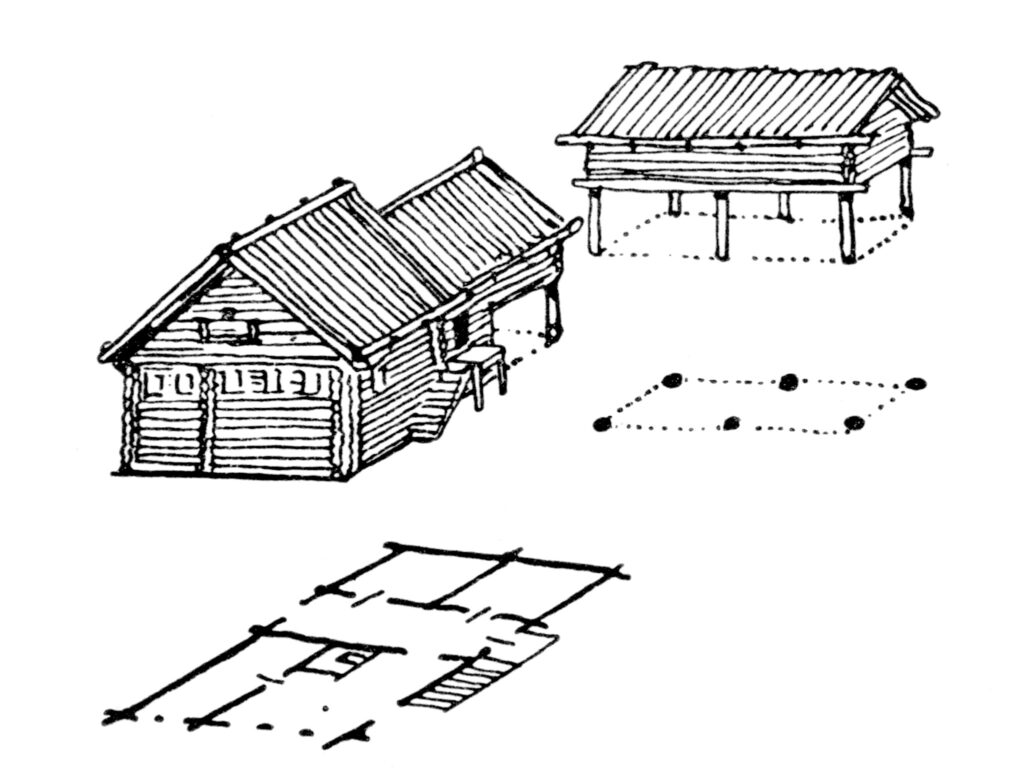 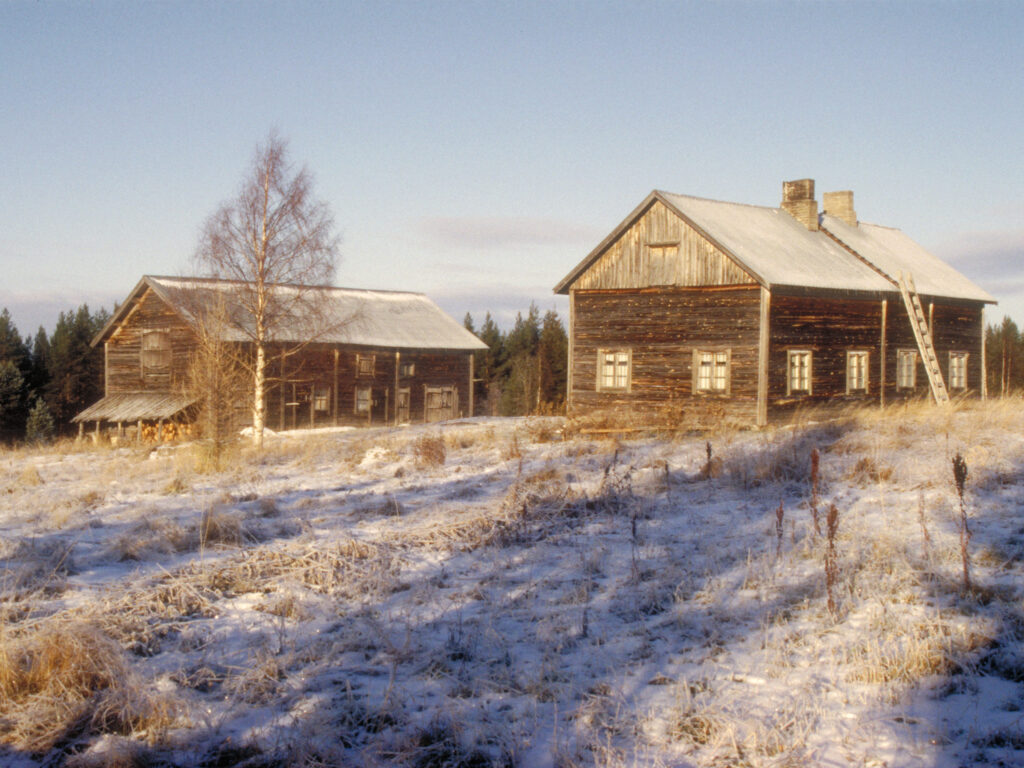 Unfortunately the previously mentioned floor plan has gone lost and we do not have other records about the size and the shape of the building whuch was burnt to the ground by Finnish soldiers during the Winter War, as was another house, the Huoseisvaara house. The two buildings were distroyed on the premise that the enemy could have made use of them, although there was no military activity near the village during the War. The village rose from the ashes after the War, but the authorities would not allow people to build houses in the White Karelian style. In the early 1980s, there were no longer any year-round residents, but one did settle there again in 1991.

Before the border was closed, Rimpi was in contact with Akonlahti (Republic of Karelia). The man from Rimpi went to Akonlahti looking for wives and the man from Akonlahti went to propose the woman in Rimpi. When the raltion was interrupted Rimpi's inhabitants turned to Hietäjärvi and Kuivajärvi. Fot the Karelians the cultural border has been more important than the national one, which artificially divided people belonging to the same kind. If it would have been possible to cross freely the border and Akonlahti wouldn't have been destroyed, Rimpi's faith would have probably been different. 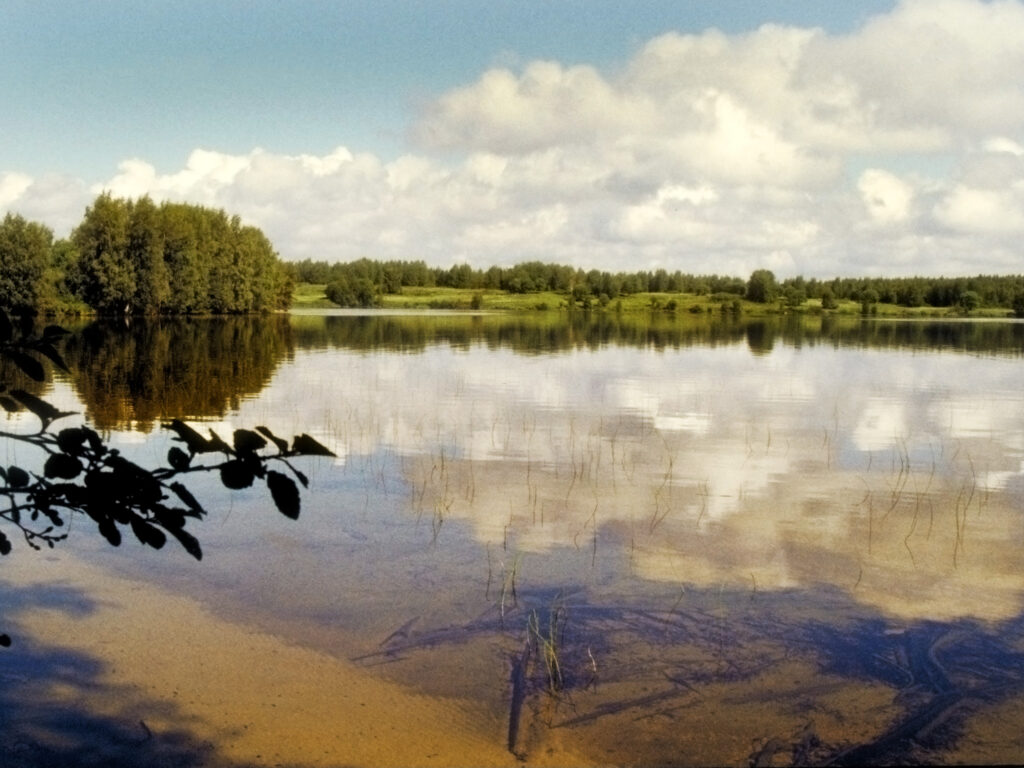 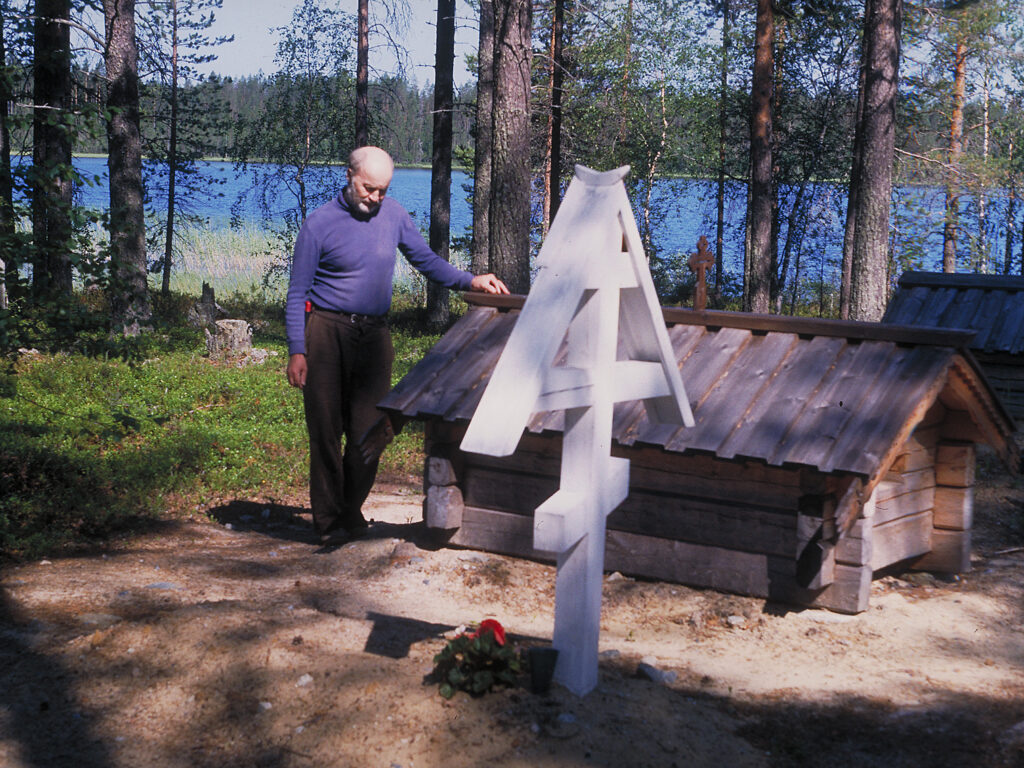 The buildings
Ala-Rimpi and Ylä-Rimpi are located in the previous courtyard of Elias Ahtonen's house. The building was burned down by the Finnish soldiers during the Winter war after the village had been evacuated. Once the war was ended, the inhabitants were not allowed to build their houses in the White Karelian style.

The Lapinsärkkä graveyard
Before the border was closed in the 1920s, Rimpi buried its dead in Akonlahti. When this was no longer possible, the village established its own Orthodox graveyard.

Gold Well or Gold Spring
Mention is made as early as 1789, in Christfrid Ganader's Mythologica Fennica, of a "Gold Well" whose waters flow into both the Gulf of Bothnia and the White Sea. The spring has a number of underground "fountains" which constantly shift the sand at the bottom. According to Rimpi tradition, anyone who eats a frog found in the well will receive a golden treasure.
The Gold Well lies in the border zone and it requires a permission to be visited. Vienan Portti organizes short excursions to the Gold Spring. 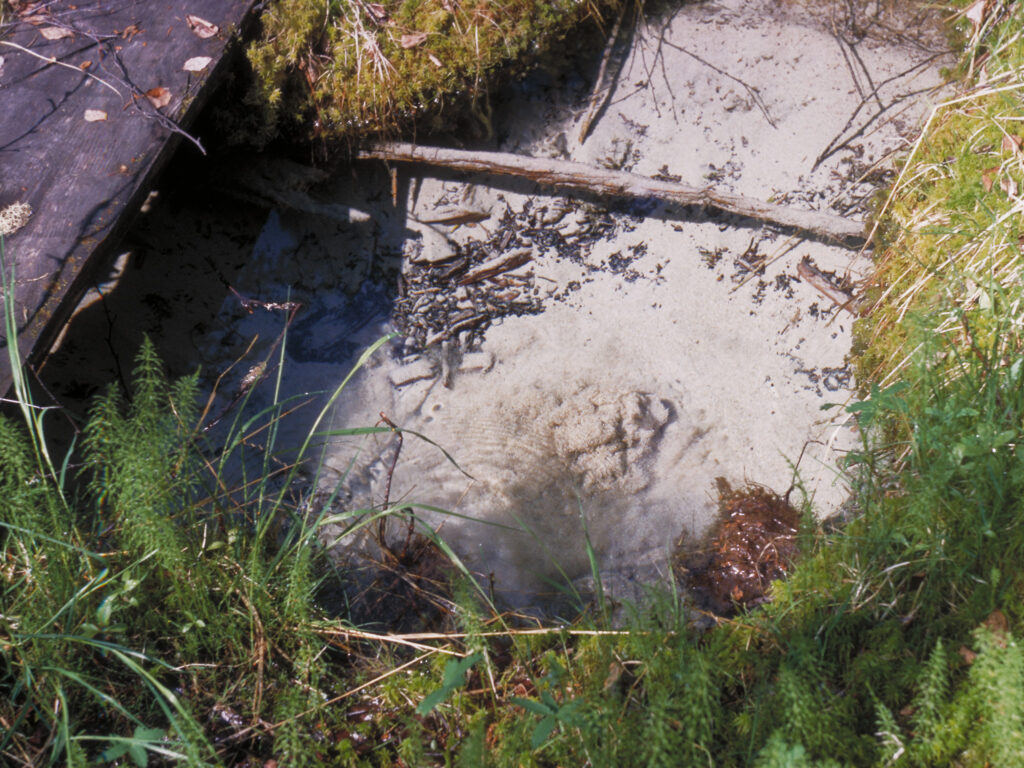 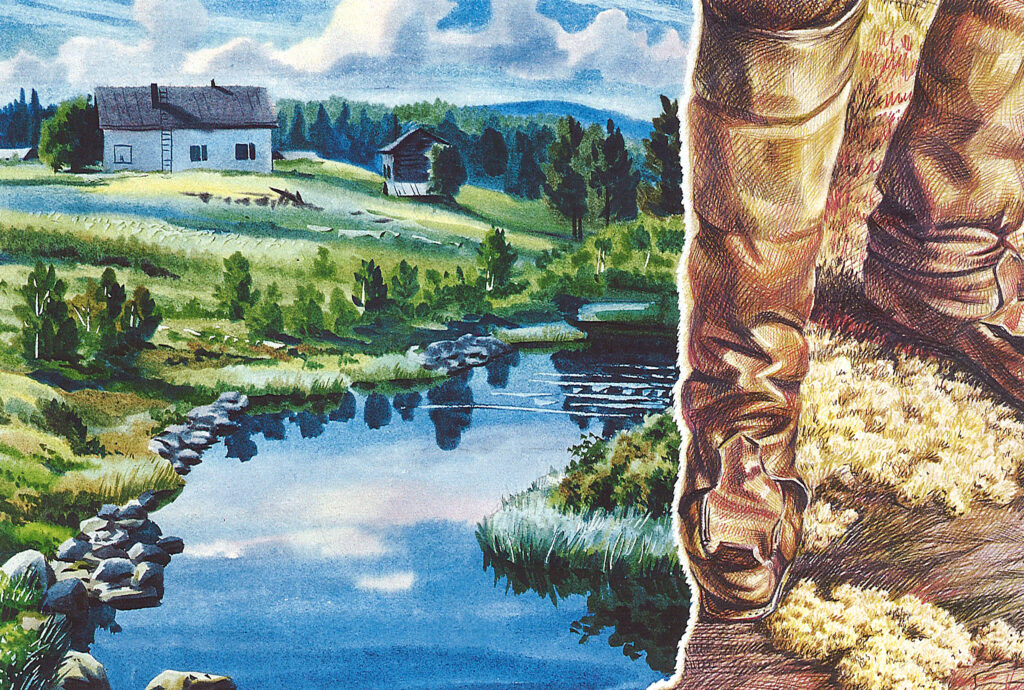 Water mill
There is a restored water mill along the river that has its source in the gold spring.

The Juortana house
In the account of his fourth field trip, Lönnrot wrote: I intend to finish this account of my journey here in Juortana, and I have a very good reason, indeed. When I arrived here, I noticed that the sole of my boot was wholly worn out. 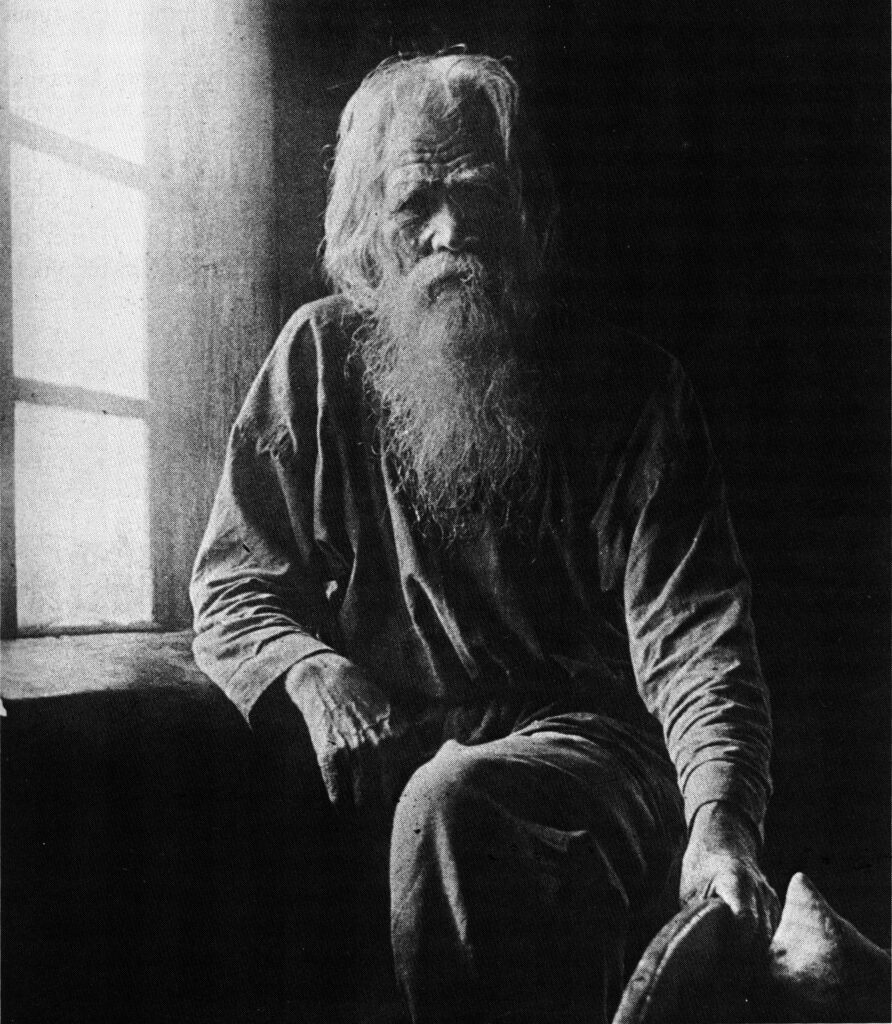